In the future, baseload electrical grid power will likely be generated by fusion power, with clean fuel from the surface of the moon. In the meantime, continued use of fossil fuels for baseload electrical power generation is environmentally and economically unsustainable. Earth’s remaining fossil fuel resources are irreplaceable as feedstocks for making basic industrial chemicals, as well as synthetics such as plastics, lubricants, pharmaceuticals, and a myriad of other vital materials.

Regardless of the source of fuel for future power generation, development of circular economies as generally depicted in the graphic, where material resources are used, re-used and re-purposed, and non-recyclable residual waste is minimized, will be the key to long-term survival.

The non-recyclable end-of-life waste component of the circular economy process from Proto Protocol  shown to the right, has been modified to indicate the contribution that EPR waste to fuel and waste to energy technologies can make to reducing the amount of material that goes to landfill. It indicates the capability of EPR waste conversion technologies to make electricity or liquid fuel from approximately 70% of the non-recyclable residual waste that would otherwise go to landfill.

This recovery is achieved by hydrothermally converting the residual plastics in the waste stream to clean ultra-low sulfur liquid fuels, and the wet biomass components to biogas. Dry biomass waste components are cleanly converted to baseload electrical power using a conventional turbine generator driven by steam produced by LoNOx gasification. EPR technologies for the conversion of combustible and non-recyclable residual waste to clean liquid fuels and baseload power can make a long term and substantial contribution to development of a truly sustainable circular economy. 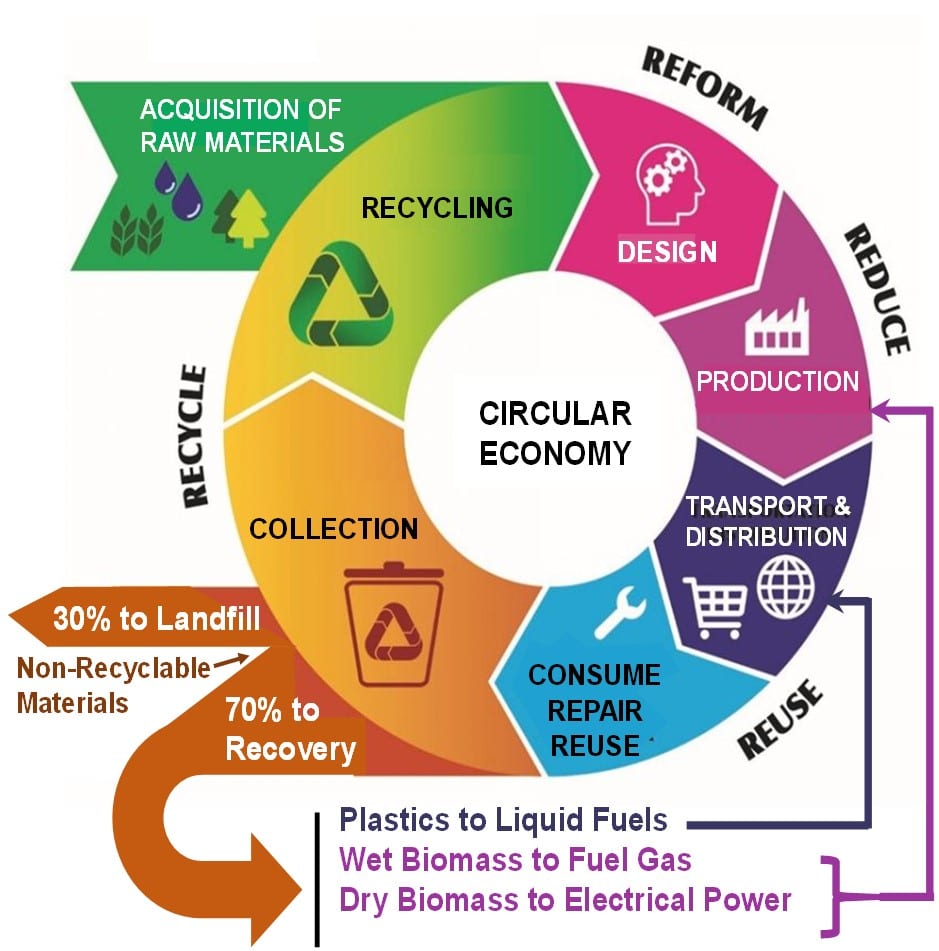 Gasification of solid waste generates inherently less SOx, NOx and particulate in the conversion of municipal solid waste (MSW), biomass, and other solid wastes than does incineration. As shown in the graphic below air emissions from gasification of solid waste to energy are far less harmful to the environment than landfill of the same amount of organic material. Landfills produce the potent greenhouse gas methane and release it into the atmosphere where it is some 25 times more effective than carbon dioxide in converting sunlight into thermal energy that is retained in the atmosphere.

(Above) Results from life cycle assessment of greenhouse gas equivalent emissions from generation of a kWh of energy from different thermal power plants.

Gasification of municipal solid waste (MSW) reduces the amount of these materials going to landfill by some  80 to 90 percent. MSW gasifiers can be designed for multi-fuel applications so they can operate on a wide variety of solid wastes. The graphic below compares the greenhouse gas equivalent emissions for generation of power using natural gas fired combine cycle (NGCC), pulverized coal (PC) coal biomass co-firing, and dedicated biomass combined cycle, as compared to direct thermal conversion of biomass from municipal solid waste (MSW).

Note that use of biomass from MSW as a fuel avoids the generation of methane and other greenhouse gasses that would have been emitted into the atmosphere from anaerobic decomposition of this biomass, were it placed in a landfill. For more information on relative environmental impacts thermal energy production, and the sources for these data, please see the comparative emissions paper that can be accessed under the website Library menu.

Plastics to Liquid Fuels: Worldwide, some 300 million tons of plastics are produced each year, and the rate of production is increasing. Plastics to liquid fuels (PTLF) conversion technology is an economically viable and environmentally responsible means of managing post use plastics.

Plastics are polymers made from hydrocarbon feedstocks such as petroleum or natural gas. They are formed by chemically linking long chains of simple hydrocarbon units known as monomers. Polyethylene, for example, consists of repeating ethylene units linked together in chains of up to 20,000 or more monomers. The carbon backbone chains of these polymers can be linear, branched, or crosslinked depending on the material characteristics desired (see the Waste to Energy and Liquid Fuels white paper in the website library).

Comparison of the energy required to produce a MJ of energy as diesel fuel from petroleum as compared to conversion of plastic (from Benavides et al Fuel 203 (2017) 11-22.)

When these polymers are heated to a sufficient temperature in the absence of oxygen, chemical bonds in the polymer begin to break, forming smaller hydrocarbon molecules. These molecules exit the main reactor as a gas with the heavier molecules condensing to form liquids when cooled. Smaller molecules such as methane ethane and propane remain in the gas phase and are used to fire generators that supply the plant with electricity. The solid phase by-product of the process is a carbon-rich char that is used as a fuel for the power plant gasifiers.

Life cycle assessments have shown that pyrolysis of plastics to recover liquid fuels that can the be used in stationary or power generation or transportation is a more environmentally responsible and economically efficient than directly incineration or gasification to generate power. Diesel fuel recovered from plastics is ultra-low in sulfur content and the energy required to make a liter of diesel fuel from plastic is only about 6% of that required to make a liter of ultra-low sulfur diesel from petroleum.