Flue Gas Recirculation (FGR) is the process of taking a portion of the flue gas from a combustion process and recirculating it back through a boiler or burner.  When the process is used in internal combustion engines it is commonly referred to as exhaust gas recirculation (EGR).  FGR has two primary purposes and one just for gasifiers.  EPR technology uses all three.

Here is a brief overview of how FGR has been used over the years:

Even a hundred years ago, FGR systems were commonly installed on large boilers.  FGR was an ingenious way to solve a difficult problem.  Boilers run at a range of fuel rates but need to produce steam at a constant temperature.  Heat transfer rates are low at lower fuel rates, producing cooler steam from the superheater.  Recirculating flue gas effectively counteracts this problem by increasing the flow rate, and thus heat transfer, through the superheater coils.

NOx are nitrogen oxide compounds that, when released in the atmosphere, lead to the formation of smog and ozone. For this reason, NOx emissions have been regulated for the last 60 years.  NOx forms when nitrogen in the fuel is oxidized (fuel NOx), and when nitrogen and oxygen in the air react at high temperatures (thermal NOx).  Since NOx is difficult to remove from flue gas, much effort has been spent in reducing its formation in the first place. The ability of FGR to reduce NOx formation has been recognized for at least as long as NOx emissions has been regulated.

FGR reduces thermal NOx by diluting the fuel-air mix with relatively inert gases like N2, H2O and CO2, reducing the flame temperature. The lower temperature prevents diatomic nitrogen and oxygen in the fuel-air mix from reacting.  FGR is not effective in reducing fuel NOx. (EPR uses a different method for this.)

In order to reduce NOx, recirculated flue gas must be mixed with air before entering the burner or cylinder.  This is somewhat different than the temperature control setup, where flue gas in blown directly into the boiler.  Thus, while FGR is effective for both boiler temperature control and NOx reduction, they require different injection points.

Exhaust gas recirculation (EGR), which is essentially FGR for internal combustion engines, was introduced in the 1970s.  EGR is now required by the EPA for diesel engines, in order to decrease NOx emissions.  For power plants, the EPA published guidelines for NOx reduction using FGR as early as 1994, when the technology was already well developed. Low NOx burners that use FGR are commonly available in all sizes.

Though often forgotten today, gasification was once a very common industrial process.  Before the widespread availability of natural gas, coal gas and wood gas were used for all the same applications.  This included widespread use for heating, lighting, and a feedstock for the chemical industry.    In fact, the first modern internal combustion engine, Otto’s gas engine of 1867, ran on producer gas, a product of air-fed gasification.

Steam injection is most commonly used method to control the temperatures in a gasifier.  Water reacts endothermically with carbon, cooling the bed.  However, recirculating gas has also been used over the years, usually together with steam.  Below is a reproduction of a drawing from a patent filed in 1920, showing FGR used together with steam to make producer gas. 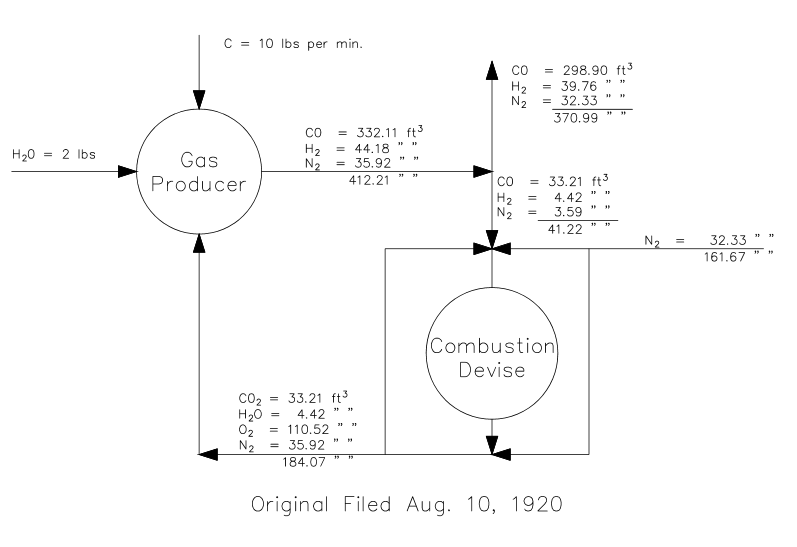 The appeal of flue gas is that it is cheaper than steam. Flue gas is usually seen as a worthless byproduct and released into the atmosphere. It requires only a recirculation damper or fan to send a portion back to the gasifier.  On the other hand, steam must be produced in a boiler using heat from the process that could be used elsewhere.  The disadvantage of using FGR is that flue gas contains a large amount of nitrogen, meaning it requires a much larger volume than steam to achieve the same cooling effect and the heating value of the resultant gas is lower.  In systems were heating value of the gas is not of particular importance, such as ones that do not cool the gas before burning, FGR is an attractive option.